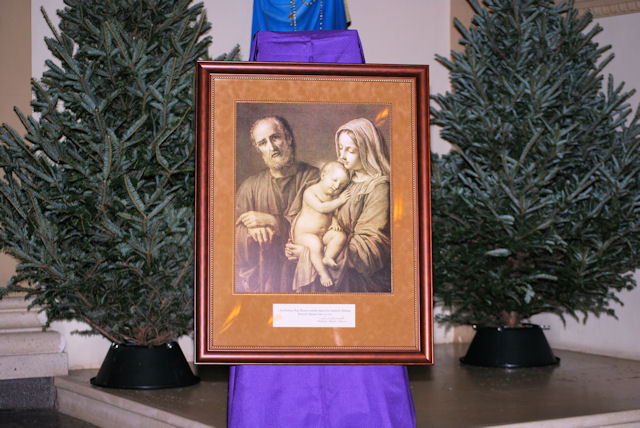 “The masterpiece of society is the family: a man and a woman who love each other!” – Pope Francis April 29, 2015

“The future of the world and of the Church passes through the family,” observed St. John Paul II, whom Pope Francis called “the Pope of the Family.” Recognizing the vital role of families in the world, the Knights of Columbus has dedicated its 17th Orderwide prayer program to the Holy Family, with the intention of strengthening Catholic families and their prayer lives.

The images were blessed by Pope Francis on June 29, 2015, the Solemnity of Sts. Peter and Paul, through the auspices of the Almoner of His Holiness, Archbishop Konrad Krajewski. Under the guidance of the state deputies, these framed images are currently on pilgrimage from council to council throughout each jurisdiction.

The Sacred Heart Knights of Columbus council was honored to host the image of the Holy Family from December 15th through December 22nd. Holy Family prayer cards with a picture of the image were ordered and given to parishioners on the fourth weekend in Advent. The prayer for the family on the back of the holy cards was recited at all the Sunday Masses. The holy cards only lasted through the first two Masses. Our council will be ordering additional copies to pass out to those who would like these holy cards.  If you would like a copy saved for you, please email us at SacredHeartgr@gmail.com.

The Holy Family Prayer Program began August 5 at the 132nd Supreme Convention in Philadelphia, Pennsylvania. Each Knights of Columbus state jurisdiction received several Holy Family images, which will be the centerpiece of prayer services conducted in churches and council meeting places throughout the Order for the duration of the program. The images travel from council to council giving each council the image for approximately six days.

The featured image for this program is an etching of the Holy Family by Giovanni Balestra (1774-1842). The original etching, based on a painting by Giovanni Battista Salvi da Sassoferrato (1609-1685), is housed in the Pontifical John Paul II Institute for Studies on Marriage and Family in Rome. 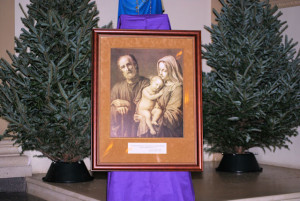